Wikileaks Reveal the Shame of The US Foreign Policy

This month we learnt about the imperial nature of the US. Wikileaks have brought to our attention the puppeteering of the US government and it’s mass involvement across the globe. US diplomats have been quoted as calling the president of Iran Hitler, and saying it is a fascist state. Russia’s Putin has been accused of working hand in hand with organised crime and that the mafia and Russian state are indistinguishable. To an Israeli like myself non of this is surprising, we grew up in harsh world of realpolitik. A world where our neighbours the Palestinian people are used as pawns by their leadership to demolish the state of Israel. A world where civilian population is a substitute for bunkers and that children serve as suicide bombers.

The US has proven that interests, not ethics, rule it’s foreign policy. With more than 100,000 dead in Iraq you can’t help but wonder – what has the US accomplished if not help expand the borders of “fascist” Iran. Doing this while aligning itself with an equally odious regime, the Saudi one – where a women recently raped was put to death as she was attacked while “alone” in a car with another man. 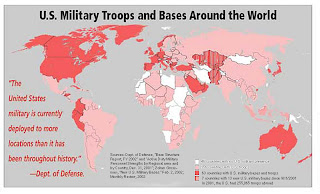 In that respect Israel is a very different place than the US. Israel’s wars are what we call “wars of no choice”, wars that have been forced upon us, either by military attacks or invasions (in 1948, 1967, 1973, 1982, 2006 and 2009). Other wars are “wars of choice”, like the Sinai war of 1956 where we aligned ourselves with France and Great Britain to force the President of Egypt to cancel his nationalisation of the Suez canal. The US is a country that barring Pearl Harbour has always fought wars of choice – yes, including the war in Afghanistan. A war against a state harbouring terrorists, which has simply resulted in Al Quaeda moving over to Pakistan and hastening the destabilisation of that state (which begun with the Saudi take-over of the education system in the mid eighties).

Israel and US are very similar in many areas. Both are democratic and both cherish civil liberties and human rights. But that is where the similarities end.

The toll sum of our security sorrows are a derivative of the Arab refusal (whether based in religion or nationalism) to accept the link between the Jewish people and the land of Israel \ Palestine and allow for our self determination in this territory. The Palestinians and Israelis are embroiled in a national conflict. They treat us badly via suicide bombings, shootings, instigating boycotts and de-legitimizing our right to self determination and historical connection to the land of Israel. Israel in turn fights terrorism with shocking collateral damage (as is the case in all warfare), negotiates with a national movement that does not recognize the Jewish one, gives up land twice within the space of 15 years, only to be used as a launch-base for terrorism.

The “treatment” of Palestinians isn’t an intrinsic policy. It is a result of the fundamental rejection of the Jewish presence in the land by a violent political elite, which is hijacking the interests of the Palestinian people for more than 100 years.

Israel seeks secure borders and an end to hostilities. By and large the government of Israel has done so in earnest in 1948.

The Palestinians are suffering from that uncomfortable place any nation is in during it’s struggle for self determination and creating a national identity. Is perpetual war the best way to make sure they get “all” of “palestine” back? Maybe they should settle for what they can get? They will continue to be stuck in that non-state limbo until they decide that their national movement doesn’t equate the destruction of Israel – “democratically” or by armed struggle.

If they chose to accept the partition of the land both our nations will prosper. If they advocate the “one state” solution or conquest by force – it will mean a repeat of the tragedy of Yugoslavia (unification by force – breaking apart, mutual genocide, two state solution).

It seems to boil down to that: all anti zionist critique is directed only at Jews who are for self determination....