It seems to boil down to that: all anti zionist critique is directed only at Jews who are for self determination. Putting aside the critique on existing Israeli policy, which is warranted at times, those who attack Zionism are racist.
Why have I reached this conclusion? I had an all out argument with an infuriating “Susie Gale” from Montréal some months ago. She threw so much crap at me lamenting how evil Zionists are that I actually formed an entire site which aggregates the accusations and counter-arguments that followed here.
The logic behind those opposing Zionism (aka the right of Jews for self determination) is the following:
Now, as we all know Judaism is actually more than a denomination, but is also a nation. The only similar group to Jews in the world are the Sikhs – they too are a nation and religion, and reside mainly in one area: Punjab.
When presented with the fact that Jews are a nation we are asked then “how come we come from different places”? The answer to that is that this is the result of most of us intermarrying in the diaspora. This point of course negates the insane claim that all Israelis are European.

A reminder: Jews always lived in the Land of Israel. This fact is not only held true in academia but also in the Koran and in the writing of Josephus and even by Mark Twain (who I adore).

The truth is that:

The resettlement of the sparsely populated Holy Land by the descendants of its ancient inhabitants, however, did not take place solely in the modern era. Throughout Jewish history, waves of returnees came back to the sacred soil of their ancestors. In the 8th and 9th centuries, A.D., Jewish immigrants re-established major communities in Jerusalem and Tiberias; by the 11th Century, they had built new communities in Jaffa, Ashkelon, Caesarea and Rafah. In the 16th Century, more Jewish immigrants developed the famous center of mysticism in Safed and beginning in the 1700’s religious scholars and pilgrims intensely repopulated Jerusalem (Michael Medved, 2006).

Thus, if Jews have no right to a land they have populated from before the time that Christ was born what right does the US or Canada have to exist? What right does any nation barring China (unified in 220 BC) or Iran (which I like referring to as occupied Persia) to exist? As Haim Weitzman once said to Lord Arthur James Balfour:

We held Jerusalem when London was a swamp! 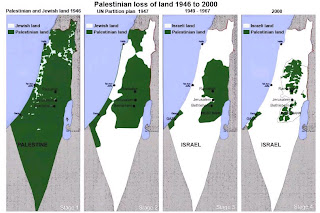 Here is the land Palestinian propaganda say was lost to Israel since 1945. However, here are the details of land ownership in mandatory Palestine: http://bit.ly/7MtPx1. Also, under the Turkish system the sovereign owned all of the non agricultural land (called ard almawat – dead lands). Once Israel became sovereign of it’s share of mandatory Palestine, is simply took over from the British. As such the map attached is a blatant lie.
← Prev: שיווק חינם זה וידיאו ברשתות חברתיות Next: משרות שיווק באינטרנט לפברואר 2010 →

There is so little understanding of what happens in Israel \ Palestine by foreign media. As an Israeli, I just wanted...

Invited to speak at Shorewoord high school last Tuesday, after memorial day, was a pretty exciting prospect for me....