Why China is NOT the new Israel.

A fascinating review of the Israeli high tech industry by TechCrunch yesterday brought about some nasty racist remarks by various readers.

I usually can’t be bothered to respond to racial slurs and plain slander but this one really ticked me off. The reasons why I engaged in what is considered to be a futile battle for the good name of Israel is that:

·         The people doing the heaviest slander were European.

·         No one wrote a single thing about China but bashed the hell out of Israel.

Just to sum things up, here was the silly tit for tat exchange I had with Dave Roberts, Sophie and Patrick: 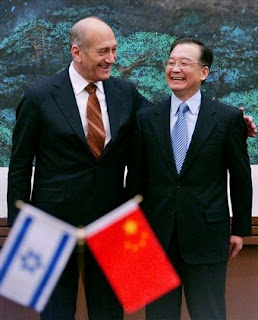 using profanity and attacking people is a sign that you are deeply insecure and you know you can’t stand up and handle the truth.

Down with apartheid israel, down with zionism and racism.

Sophie, the definition of Zionism is that Jews have a right for self determination. Surely you wouldn’t deny people their right for self determination based on ethnicity? That is, actually, the definition of Apartheid – creating the distinction of political and human rights based on ethnicity. So you see, in essence, if you advocate an end to racism you should direct your critique at those calling for an end to Zionism. Yes, Sophie, that means that you are actually the racist.

Wake up and smell the coffee. Be a real man and call things for what they really are. Israel is a bloody racist state. Israel is the shame of humanity and of Europe in particular.

Patrick, actually Europe is the shame of Europe. That is if someone wishes to discuss racism, or coffee for that matter – which you seem fond of. Coffee, for example, is the product of the historical exploitation of Europeans of South America. The bloody and brutal history of Europe leaves a sour taste in the mouths of those who know it.

Israel, is a young state faced with extreme challenges and, considering the neighborhood, is doing a fine job upholding the European theorized code of civilized behavior.

Patrik, mate, why don’t you pop over for a visit and get a taste of a country that isn’t actually built on the crushed bones of slaves, vassals, and crusades? Get a sense of a nation that is struggling to find its way, sometimes warring and sometimes making peace, sometimes failing and at most times succeeding at being one of the most fascinating countries in the world.

L’Chayim mate! (that’s cheers in Hebrew – literally meaning “to life” – Patrick, I suggest you get one).

The State of Israel is home to many smart people, and many great technologies and companies have come out of Israel.

But to somehow use that as a metric of success in the face of the situation vis-a-vis the Gaza Strip, West Bank, the Israel-Lebanon war, etc. is disingenuous at best, and disgusting at worst.

I’m not making excuses for the Arabs, as some of them are responsible for some heinous acts as well, but I would advise the State of Israel, its citizens and cheerleaders not to get into the business of trying to swap camera phone technology for human dignity.

Actually you make a good, level headed, argument (refreshing will all the dribble that is being thrown about here).

It’s a tough situation we, in Israel, are in. Fighting both legitimate claims for more self government by the Palestinians and also battling terrorism which stems from pure racist and genocidal roots embedded within the Palestinian national movement is nearly impossible. The result is, as you said, a severe damage to human dignity.

It’s a tragedy – one most of us in Israel hope that the conflict will be resolved sooner rather than later. It just so happens we have the upper hand in this conflict, I shudder to think what things would have looked like if we were the underdog.

But the most annoying thing is how China which is a dictatorship of the nastiest kind in terms of human right abuses and is, if one wishes to pick a number of local ethnicities claims, an occupying force in Tibet and Xiangin, is not even mentioned once. The scathing anti-semitism underpinning the critique of Israel was too much for me to bear this time. Only Mr. Roberts made a valid claim. My hat is off to him for making a valid, painful, point on the state of the nation which is forced to pick security over human dignity – may we have peace soon. Amen.

I had the sad, great honour of being the keynote speaker in a community ceremony for Gilad Shalit at the Stroum Jewish...

It seems to boil down to that: all anti zionist critique is directed only at Jews who are for self determination....