The Heart of Darkness in Tel Aviv Last month I spent some time to break away from the “routine” of working for my cool startup company and sniff around in the south of Tel Aviv. While I do live there myself (low rent, great food and friendly people), the fact that the area is so cheap is the natural result of the city lifecycle that brought in, time after time a myriad of disempowered populations.

Historically, these populations were Jews of Middle Eastern (Sephardi) origin that were pushed down the social ladder. While regaining their standing in Israeli society from the 80s onwards, they still earn about 20% on average less than their American – European Jewish counterpart.

Thus, the poor Sephadi populations of the south of Tel Aviv in their traditional, working class, neighbourhoods were the first to be impacted by the ramifications of the 1994 Oslo peace accord with the Palestinian Liberation Organization. The treaty resulted (amongst many other things) at the end of commuter labour from the West Bank to work the bustling city of Tel Aviv. In their place came a trickel and then a flood of migrant workers from the Phillipeans, China, Romania, Columbia, West Africa, Thailand, the former USSR and Poland. Almost all entered Israel legally due to a high demand for manual labour of sorts and the majority stayed on illegally despite widespread exploitation and breaches of human and labour rights (denial of pay, lack of medical treatment, detention in jail instead of a civilian facility and so much more).

These sorely needed immigrants formed a community nuclei in Tel Aviv around the new central bus station (click here for official website) inaugurated in 1993 and dubbed an architectural abomination (it’s just as bad on the inside, see here and here). These immigrants, in recent years, are not only migrant workers but full-blown refugees. Seemingly, being a refugee is a legal status which is the work of the UNHCR to review, interview, accept or reject. This body’s work has become increasingly important over the past year and a half with a large influx of refugees, some real, some not, mostly from Africa. 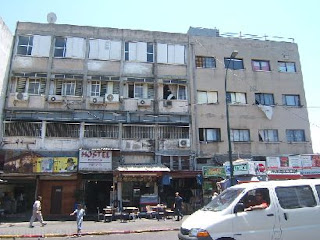 And so, on a Friday about a month ago my cousin and I, escorted by a friend from graduate school made our way to a refugee shelter to offer some clothes and food we collected. The place was a “converted” cinema that stank of urine (picture to the left). Walking up three flights of stairs, in a building that looked like a bombed out shelter, we reached the top floor, passing by Africans speaking French, Arabic, English, all in heavy accents, indicating these were not their native tongues. Dozens of people, mostly women and children were holed up in the top floor with mattresses on the bare, filthy floor. The plastic bags with clothes and food were snatched from our hands by women who scurried off to check the contents of the bags in what little private space existed. I was quite shaken up when we left.

As I looked back towards the building I noticed a familiar pattern – cellular antennae were placed all around on rooftops. This reminded me of a quote I stumbled across by the CEO of a leading cellular company:

If the cellular companies will be forced to offer full compensation to municipalities due to a drop in real estate values of areas adjacent to cellular antennae, we will erect fewer antennae. Consequently, the radiation from the cellular phone will increase, and the antennae will be placed in areas where compensation prices will be lowest for us. It is obvious that those will not be in rich areas (Gabai, 2006).

So, these poor people were not only stuck in an impossible situation and discriminated against as non-citizens who have no legal status, but the entire south of Tel Aviv is discriminated against in increased radiation due to the placement of fewer, larger antennae in the poorer parts of the city. A video a friend sent me illustrates how flawed the entire system is (check it out below). The reason being that government, even when propelled into action, does not, or is unwilling, to tackle the externalities of market activity.

Makes me wonder what I’m paying all those taxes for… maybe Kurtz knows.

Getting a Drivers License in Washington State

This is a short summary of the difference between getting a drivers license in Israel and the State of Washington....